Residents form groups to dance to the Oiden music with their own costumes and choreography. This dance takes place the formation of “My Town Oiden” and “Oiden Sou-Odori”.
Dancers are composed of a member of a company, people from local government, friends and so on. Various team join this festival.

The finale of Toyota Oiden Festival is one of the biggest fireworks display in the Tokai region. Fireworks wrap up the evening with an impressive display of works famous fireworks expert, hand-held fireworks Niagara Falls fireworks and more that draws. 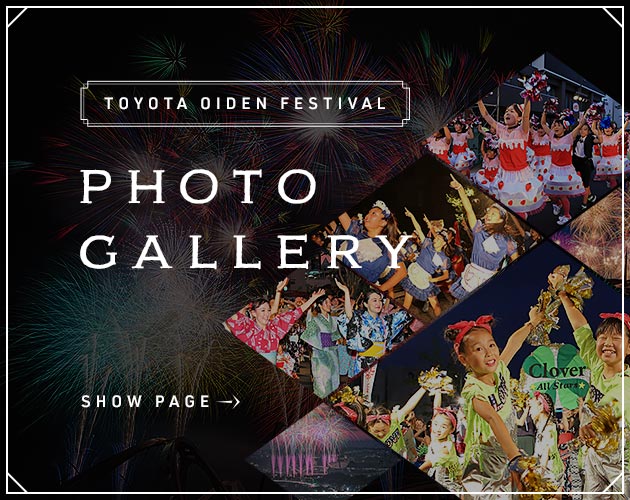 The History of Toyota Oiden Festival

The Origin of Toyota Oiden Festival

1968, In memory of Meiji 100th on the Japanese calendar, “The 1st. Toyota Festival” was held in conformity to the date of “Tenno/Ogi Festival” which had been held in the central part of the city for a while. Toyota City in those days, because of municipal merger and development of the automobile industry, many people came to the city from outside of the city and the prefecture to find work. Toyota Festival was born from the desire of that “Both people who came to Toyota City recently and who live here since a long ago can enjoy Toyota city as our hometown”. With a focus on “Citizen Folkdance Festival” and “Fireworks”, it was developed as traditional events that was rooted in the area. They desired that Toyota Festival, which continued for twenty years, became more attractive festival. So in 1988, “Toyota Festival Kondankai” ( Informal social gathering for Toyota Festival) was organized and proceed with the investigation to enjoy more people. And 1989, “Toyota Festival” was renamed into “Toyota Oiden Festival” and made a new start.

At the beginning, Toyota Oiden Festival was started from the formation of “Oiden Sou- Odori” and “Fireworks”. “Oiden Sou- Odori” is a festival that dancers who wear artful and ingenuity costumes and perform to the music of “Oiden”. It was popular among many people because inexperienced people could be involved in this cheerfully. In addition, “Fireworks” is one of the biggest fireworks display in the Tokai region and receiving high evaluations. Many people visit to see this fireworks that is set off by famous fireworks expert.